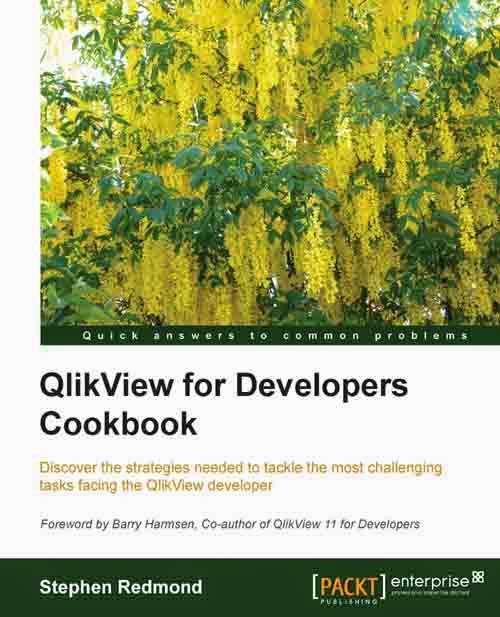 Stephen is a very experienced and highly regarded QlikView techie. What he doesn't know about implementing QlikView isn't much worth knowing and so I had high expectations of his first QlikView publication. When it was released, some were expecting QlikView for Developers Cookbook to be a sequel to QlikView 11 for Developers, and in a way it is, solely because where as QlikView 11 for Developers was aimed at those new to QlikView and intermediate users, this book targets those intermediate users and above who have a good foundation in QlikView, but who wish to take their skills and experience to a more advanced level. And that's where the similarities end.

As the title would suggest, this book has a very different format to the last; rather than being a "teach yourself" book, this is a technical cookbook. For those that aren't familiar with technical cookbooks, they consist of a series of small, commonly occurring problems and the "recipes" to solve them. This makes it more of a reference book that you can dip in and out of, picking the bits you need to learn or to solve your development problem.


So what does it cover?

The short answer is, a lot. In fact this would be an insanely long review if I listed all of the contents; the table of contents in the book covers over 3 pages. So I'll stick to just giving you a very high level overview and then pick out a few of what I think are the highlights.

The back of the book gives a pretty good set of bullet points that describe it's contents as follows:


What you will learn from this book


There isn't a lot I could add to that description so I won't bother trying. But there are some sections that stand out to me as great tips. They might not be the most advanced tips in the book, but they are the solutions to some of the most common questions I get asked as a QlikView consultant. These include:

The bottom line isn't quite as simple as it was in my last review. There is no doubt that there are some great tutorials in this book and coming from Stephen I wouldn't expect anything less. If you have been working with QlikView for some time and want to take your skills and experience to the next level, you could learn a lot from this book.

That said, I do have a concern with using a technical cookbook as a source of learning. The concern is related more to the cookbook format than to this book's specific content. The format for each recipe is pretty simple, describe the problem/aim, give step-by-step instructions on how to implement the solution, then give a very brief explanation of why the solution works. And it's this last point that gives me the concern, for anyone trying to learn from a cookbook rather than simply solve a problem, the short nature of the explanation can sometimes leave them more puzzled than anything.

With that in mind, I do also have to wonder if the technical cookbook format really works in the world of the internet and more specifically the medium within which I'm writing this review, blogging. Each recipe is essentially a good blog post and in fact, some of the tips in QlikView for Developers Cookbook have actually been posted on Stephen's blog in the past. So with that in mind why would anyone pay their hard earned money for this book when a quick Google search could through up solutions that are equally as good?

Thankfully I can offer an answer to that question. The internet is full of people eager to offer their advice based on their experience. Some will have a wealth of experience and expertise to base their advice on, others will not. And no one has done it all! So for someone less experienced, how can they hope to separate the good advise from the bad? QlikView for Developers Cookbook has been written by one of the best, and more importantly, it has been technically reviewed by several others who can be considered amongst the best also. And so the tips, tricks and advice offered can be relied upon.

So to finally get to that bottom line, I am happy to recommend QlikView for Developers Cookbook. I'll be recommending it to customers for sure.

You can get QlikView for Developers Cookbook in both paperback and ebook versions. I'll include a few links here for places where you can buy the book but I'm sure I'm sure it's available from other places too.

The legal bit: I did receive a copy of the book free of charge from the publisher Packt in exchange for writing this review. I received no other incentive from either the publisher or the author and neither had any input into the content of this review, thus the opinions expressed are solely my own.
Author: Matt Fryer