A new release of the Qlik Sense WordPress Plugin is out. Version 1.3.1 brings the following tweaks and changes:


If you'd like to help translate the plugin into other languages, please get in touch.

If you have the plugin installed already, the update should become available in the WordPress admin control panel of your site. Full details of how to install and use can be found here.
Author: Matt Fryer No comments:

Qlik for WordPress v2.0 has just been released. This release provides the biggest improvements to date, bringing a large number of new features as well as the usual tweaks and bug fixes.

If you've tried the plugin before and found it stopped other features and plugins from working, give it another try as hopefully this issue has now be resolved.

The plugin now has its own settings page where you can turn on or off the otional features.

Qlik Web Syntax Highlighter v2.0 has just been released. This release provides the biggest improvements to date, bringing a large number of new features as well as the usual tweaks and bug fixes and follows: 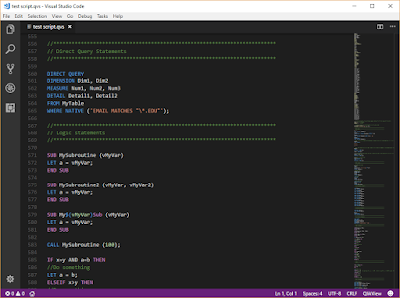 I've received a number of similar questions lately regarding the absence of any new posts over the last year or more and my sudden return. So I thought I'd address them all out in the open. Here goes....

Am I still alive? Yes, thankfully I am.

Have I given up Qlik? Are you kidding? Until they develop an effective treatment I'll remain an addict.