I finally got some time this week to sit and play with QVSource, produced by the guys at Industrial CodeBox. It's something I've been meaning to get round to for some time but other things kept getting in the way. Below is a quick run through of my first play with it and what I thought.

On its website (qvsource.com), it is described as follows:


"QVSource makes QlikView the best connected Business Intelligence platform available and enables a new range of QlikView applications to be built which mashup and provide insight into data from a wide range web APIs and other data sources not natively supported."

How does it work?

The basic principal is simple, QVSource plays middle man between QlikView and the APIs. QlikView can natively make web calls to return data. QVSource runs a small web server which QlikView can make a call to and it then handles communication with the relevant API returning the data to QV.

I was provided with a download link where I could obtain 2 things, the software and a license key file. The software comes as a zip file and on unpacking I discovered no installation appeared to be necessary. OK, time to read the documentation maybe? Don't be silly I'm an impatient techie, I just want to play and besides, I figure trying to do it blind would be a good test of how easy it is to use. For those that do wish to read up first there is a Getting Started Guide explaining in detail the things you need to know to get off the ground.

I fired up qvsource.exe and was presented with an initial window like this: 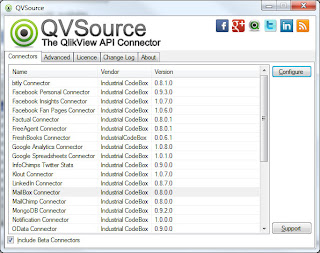 First things first, how to apply the trial license I had been given. Clicking on the License tab presented a screen displaying that I had no license installed and a button to the right labelled Apply License. Clicking this popped up a window with which to find and apply the license key file (.lic) I download earlier. Once applied everything looked set for me to crack on with getting some data into QV. 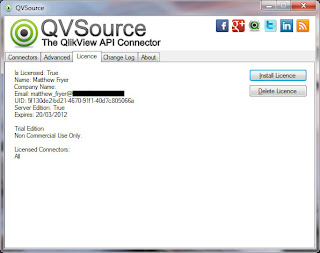 Moving back to the Connectors tab I decided to play with Twitter first. I selected the Twitter Connector and hit the Configure button to the right of the window. This popped up a larger window with what, at first glance, looked to be rather a lot of settings. 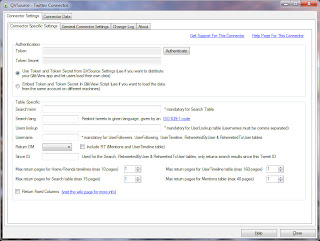 No worries, a helpful link towards the top right labelled Help Page For This Connector took me to the relevant Wiki page (so much for not reading the help) and it didn't take me long to work out my next step was to hit the Authenticate button. This wasn't initially obvious as it appears to the right of an input field and so I assumed I needed to enter a Token before clicking it. Maybe a slight interface tweak for the future but no biggy. Clicking Authenticate popped up a new window asking me to enter my Twitter username and password. 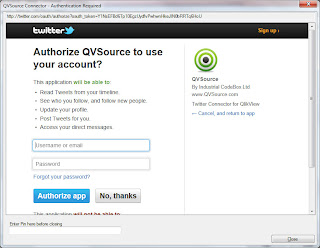 After entering them and hitting Authorise App I was presented with a Pin Code. The box at the bottom left asked me to enter the pin before closing but it had already done this for me. 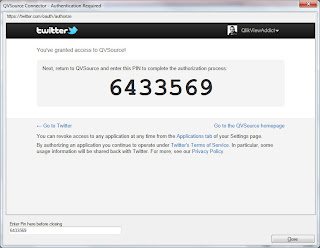 Closing this window took me back to the Twitter Connector window and the Token and Token Secret fields were now populated. 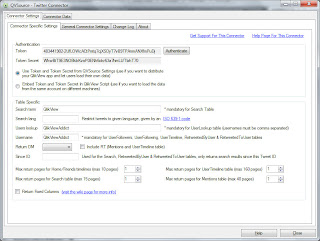 I populated the Search Term, Users Lookup and Username fields in the lower half of the window with total guesses and then clicked on the Connector Data tab at the very top. At this point things started to look very promising and the screen showed a list of tables of data available to me from the Twitter API. 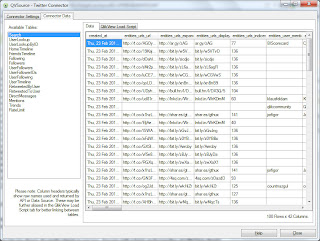 I chose the Search table as it was top of the list and after QVSource did it's thing I was presented with a table of data showing tweets matching the search term QlikView as I had entered in the configuration screen. But what next? How to get this data into QV? Then I noticed the QlikView Load Script tab. 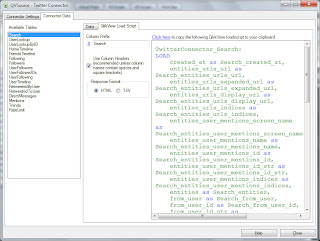 This tab offered me a ready made Load statement to cut and paste into QV. Leaving QVSource running in the background so it could work it's magic I quickly pasted the Load statement that had been generated into the script of a new QVW and hit Reload. It was as simple as that and I had Twitter API data in QlikView. I quickly built a couple of objects in QV to prove all was as expected. 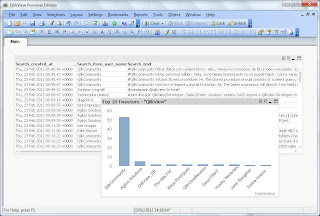 I performed this test with QV10 but have since also tried with with QV11 and there is no reason it shouldn't work for older versions of QlikView also. I also played with some of the other tables of data available through the Twitter API with equal success.

Where do I start? The obvious benefit is in being able to pull data from sources which in the past would have proved difficult. QVSource pays for itself in the time saved doing this alone.

As you can see above, it's pretty simple to use too. Anyone with a basic understanding of QlikView should be able to get things up and running in a matter of minutes. Without reading much documentation I had it pulling data from Twitter in under 10 minutes.

If you do get stuck then the documentation is second to none with a Wiki dedicated to QVSource covering the entire product including how to get the individual connectors working. This documentation you might need, as despite how simple QVSource is to use, some of the web APIs can be a little tricky to get running if you are not familiar with them. Following the Wiki solved any trouble I had and I've since also pulled data from Facebook, LinkedIn, Google Analytics and a mailbox, all without too much trouble at all.

Well, not a lot really, I had to scrape the bottom of the barrel to find these. Remember though that this is a very new product and so I'm sure the development Industrial CodeBox are doing will continue to improve it going forward.

The first thing to note is that dealing with large volumes of data will be very slow. This isn't a limitation of QVSource however and rather a limitation of the speed with which data is returned from the APIs. Bear in mind that the data will also be pulled over your internet connection and so again this could prove slow. Most APIs limit the amount of data they will pass anyway.

I found dealing with multiple instances of the same connector to be a little tricky too. For some connectors, such as the MailBox Connector, the authentication details must be entered into QVSource rather than in the QV script. Because of this you would need a seperate instance of QVSource running for each mailbox you wish to read data from. This isn't too hard to achieve by simply copying the QVSource folder repeatedly and configuring each instance to run on a different port (a setting on the Advanced tab). Moving the authentication details to be part of the request URL in the QV script would make this work with a single instance of QVSource and this is something that has already been done with some of the connectors such as the Facebook Personal Connector. I'm sure its something they'll get round to implementing for all connectors at some point soon and will drop the guys an email to make sure I'm not overlooking an obvious solution.

Also, the QVSource application needs to be running in the background for QlikView to refresh the data. This is fine when using it with QV Desktop but when running in a server environment, QVSource needs to be able to recover if the server is rebooted or more importantly continue to run if the user logs out. There is however a relatively simple work around to this issue using the Windows Scheduler as you can read here. Maybe the future could bring a version which runs as a service with a web control panel as this would bring it inline with QVS architecture.

The power of being able to analyse social media and web traffic data is unquestionable for marketing companies and departments (possibly even for social recruiters). QVSource coupled with the power and ease of QlikView makes doing just that a very quick and simple task.

Would I recommend it? Without a doubt!
Author: Matt Fryer