Opening a QVW Without the Data

I read a post on another blog earlier today about how to open a QVW file without its data and left a comment about an alternative way to achieve the same thing, so I thought I'd share it here too.

For those that have never come across this feature it can be useful when working with very large files that take a while to open and more importantly to recover a QVW file if the data in it has become corrupted for some reason. The latter is thankfully a rare occurrence but has been known.

You can open a QVW without its data relatively easily by right clicking a document in the Recently Opened Documents list in the QlikView start page and selecting the option Open 'MyApplication' Without Data. The 'MyApplication' will be the name of the QVW file you selected. 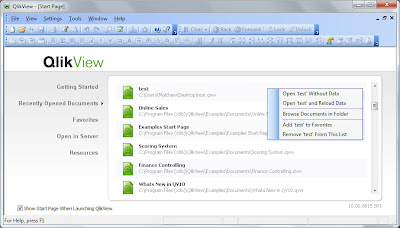 If you've chosen to for the start page not to show you can get to it via the Help menu by selecting the option Show Start Page.

This method is fine if the document in question is one you've opened recently but if it's not then it won't be in your recent document list. Thankfully there is another way to open a document without the data using the command line parameter "nodata" as follows:

If the code above appears on multiple lines then ignore that and type it all on a single line at the Windows command prompt. Obviously you'll need to modify the path to qv.exe and also the path to the file you are wanting to open.

A little tip that can come in handy once in a while.
Author: Matt Fryer