I posted yesterday about downloading the newly released QViewer that allows you to view the contents of a QVD file without having to load it into a QlikView application. QViewer was produced by Dmitry Gudkov, a QlikView consultant from the Ukraine and released on his blog a couple of days ago. If you haven't yet, you can read his release post and also find a download link here http://bi-review.blogspot.co.uk/p/fast-qvd-viewer.html

It's worth pointing out that this is a demo version and Dmitry has this to say about it:


This is a technology demo which will be replaced with more functional self-updated version later.

So you can't expect a totally polished application, but from the few tests I've run with it so far, it's been pretty good.

The download is a Zip file and contains a number of files including a setup.exe. I extracted the archive and ran the executable. The install was quick (the entire Zip is only 230KB) and the application started itself afterwards. A simple menu across the top of the QViewer window presented me with the option to open a file. I clicked it, navigated to a QVD file and within a few seconds was presented with the contents of the file. 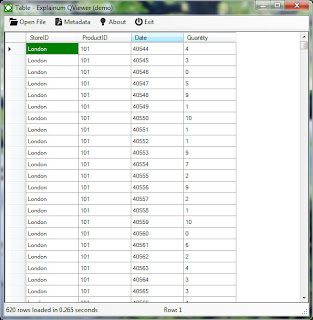 The next menu item on the menu allowed me to view the meta data for the QVD I had opened. As expected, clicking it presented me with another window telling me lots of useful information including the number of rows, the number of columns, the number of distinct values in the fields. 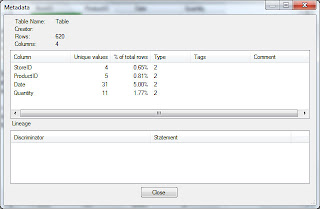 As well as this basic meta data, clicking on a column in the main QViewer window presented me with a small window showing all the distinct values within that column and more importantly, gave me the option to search within it. 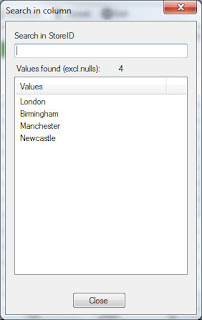 It's worth mentioning that this search only effects this window and not the main QViewer window and so you can't use it to search for specific records, only distinct values within the selected field. Maybe that will be a good addition for the final version.

The only real issue I've found so far is that when opening a very large QVD (in excess of 1GB) I received an "Out of Memory" exception. This is likely because the application is compiled as a 32bit version and it simply hit the 2GB limit a single process can address on 32bit windows. Dmitry suggests that from his tests, a memory usage will be approximately 3 times the size of the QVD.

That aside, this is a great little tool and I think this will become even more useful with some tweaks and a 64bit version for the final release. I'll certainly be adding it to my QlikView toolbox.
Author: Matt Fryer